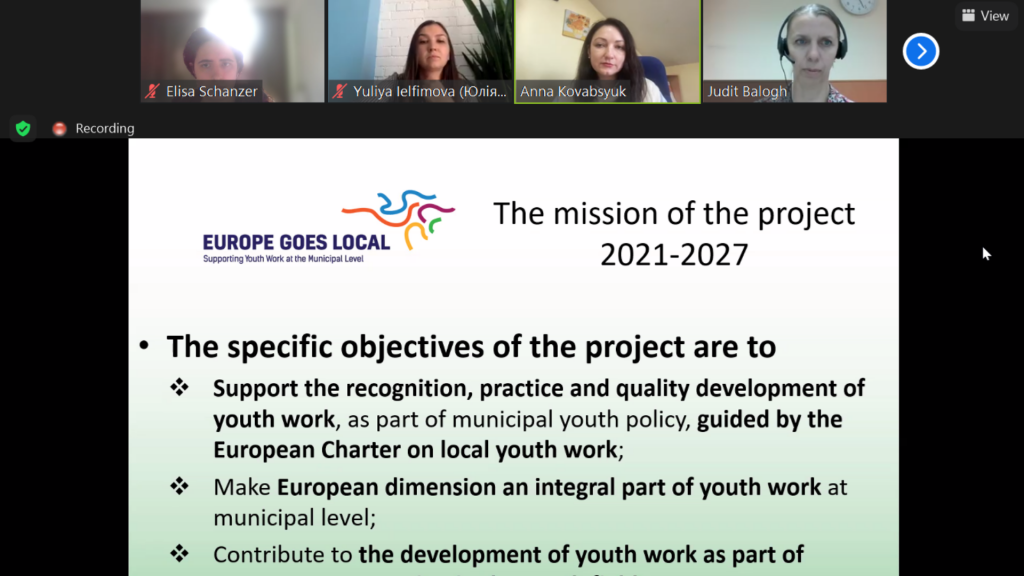 The online training “Opportunities of the international network “Europe Goes Local” for Ukrainian cities” was organised by SALTO EECA in cooperation with Information Centre for Erasmus+ Youth and European Solidarity Corps in Ukraine. There were participants from all over Ukraine and several European countries during the afternoon.

Judit Balogh, the coordinator of Europe Goes Local, was invited to present the network to the participants. “We want to support and give recognition to local youth work”, says Judit. “The European Charter on Local Youth Work and the Changemakers Kit are great tools for that. (Editor’s note: see the end of the article for links) The charter was also translated in all the languages from the countries in our project.”

Another important aim is to make the European dimension part of local youth work. “We do this partly by promoting the European programmes (Erasmus+ and the European Solidarity Corps) to municipalities”, says Judit. “We’re also facilitating study visits, trainings, seminars, project labs, network opportunities,… for municipalities so they learn from each other on a European level.”

The next step for the project at the European level is to create a network of Charter Ambassadors. “They could support quality development in local youth work by using and promoting the European Charter on Local Youth Work and the Changemakers Kit.”

Marko Kovacic, assistant professor in Youth studies at the University of North Croatia, and Mario Žuliček, Advisor on International Programmes and Youth at the Association of Cities of the Republic of Croatia, talked about how they implemented EGL in national projects in Croatia and on the European level.

“We’re working on two levels with EGL, the European and the national level”, says Marko. They decided to work in cycles of one year and a half. At the beginning of each cycle, cities and municipalities fill in a questionnaire about why they want to be involved with EGL. “Then, we select approximately 15 cities and municipalities who are getting training and acquire competencies in youth work.”

The participants develop individual plans about youth work that they’ll implement in their community when the training ends with the help of a supervising youth worker. “We insist that the plans are designed in a way that is implementable in one year, that involve various participants from the community and that have a long time effect”, says Marko. “In addition to this, we use opportunities of EGL and Erasmus+ to send local representatives to study visits in various countries where they can learn about implementing their plans.”

During the cycle, they also host study visits and conferences to host good practices. Each cycle ends with a national conference in which each municipality presents their work of the past year and a half.

“The participants also need to make an analysis in their city before they can think out a plan”, says Mario. That’s why they have the “City for Youth” certificate. This certificate system is a tool to make an analysis based on 71 criteria in 8 thematic groups. “One of the basic criteria is to have signed the European Charter on Local Youth Work”, says Mario. Association of Cities believes that this certificate system can be implemented in other European countries as well, with a small adaptation in the local context. Those interested can contact them at info@udruga-gradova.hr.

EGL started in 2016 and grew to a network with 27 National Agencies, two regional SALTO’s, and several umbrella associations. “The most important thing is that we have 200 local organisations and stakeholders that joined EGL through the network”, says Judit. SALTO EECA made a map with all the 7 countries of Eastern Europe and the Caucasus (EECA).